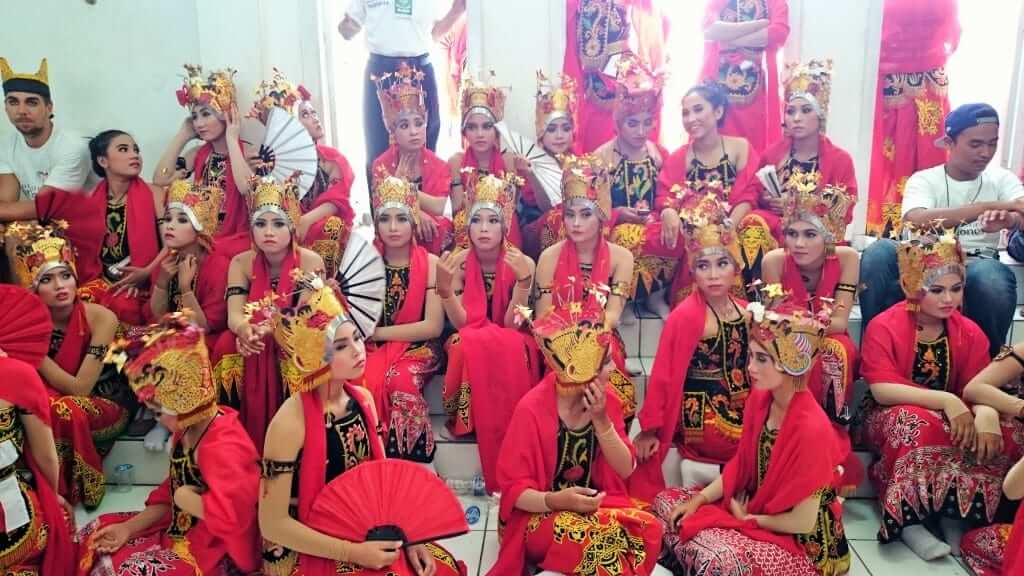 In Indonesia the concept of breakfast is bit different from what we are used to. Indonesian eat most often the same rice-based food throughout the day and our Hotel was no exception. Luckily they were prepared for our European guest group with one toaster that was in heavy use the whole morning. For our surprise the coffee was also very good and tasty. A big breakfast was indeed needed since the day was going to be long! 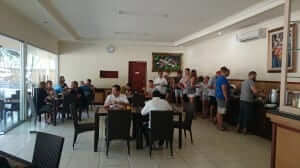 Around 10 o’clock our tiny tour bus headed to the festival area which was luckily located nearby. We didn’t know what to expect and everyone was excited to see how the day was going to be. At the backstage of the festival area several make-up artist were already waiting for us. Since there was almost 40 of us in total the schedule was unusually strict. Girls took the first turns. It seemed that the locals had a lot of fun painting our white skin and face and after a while almost all of us looked like we just spent a heavy Kuta night out. So much we had “Smoky-eyes-effect” on our eyelids. The guys were also wearing makeup, most of them probably for the first time in their life. 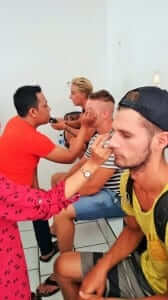 The point was, after all, to look good on the stage and for this you need a bit more eyeliner and mascara than usual. While the others were getting their makeup done, the rest of the group started dressing into the costumes that were selected for us. We were told that the traditional costumes for girls were usually red but since we were white skinned and taller than the local girls they chose to use deep purple and violet costumes for us. 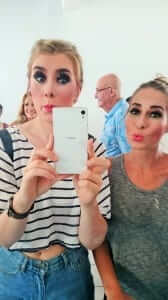 The girl costume was incredible pretty but really sweaty to use. The sarong was tightly wrapped around our waist with a piece of fabric so that you could barely breathe. Sometimes you have to suffer a bit for the sake of beauty. The top consist of three different pieces, and armbands and a long scarf completed the look perfectly. 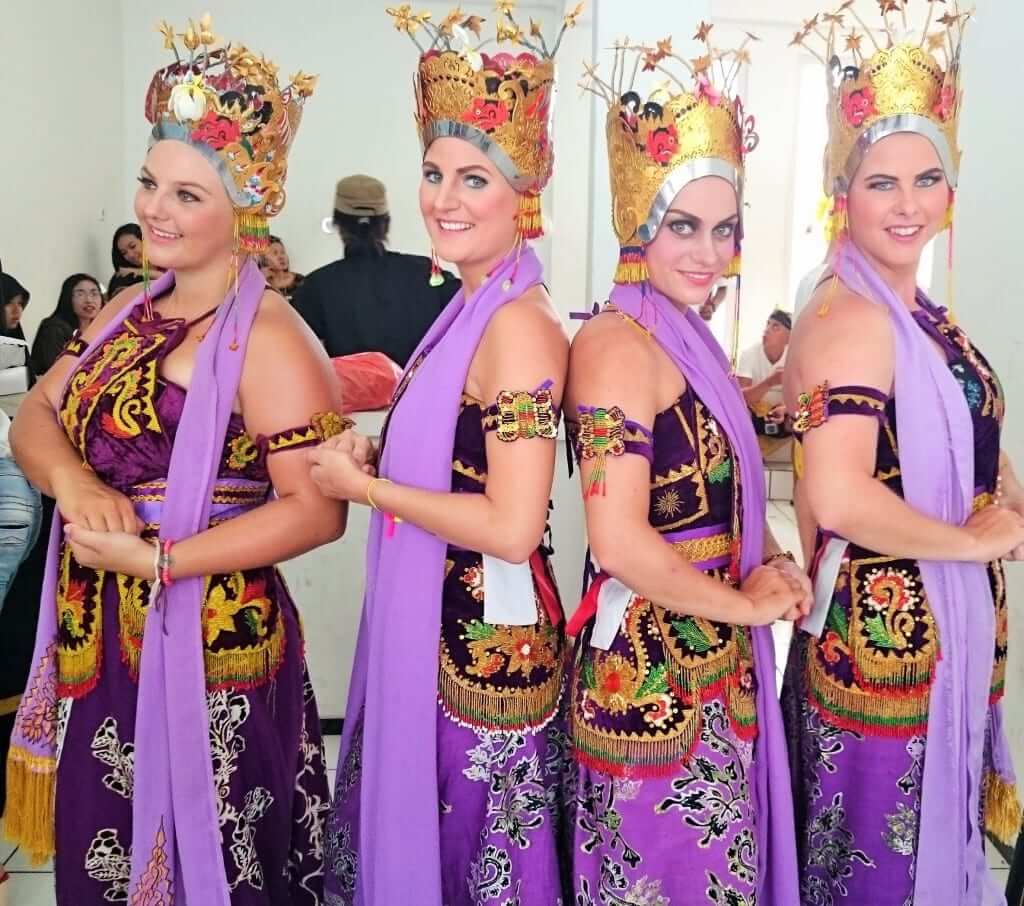 Men’s outfit was a bit more simple consisting of sarongs and t-shirts that were given us a day before. An important part of the men’s traditional look is also the headband called Udeng. The colours varied between bright yellow and dark pink. Not the most typical shades what we have seen on our pale white skinned guys! 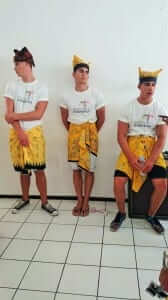 Midday consisted of lot of waiting and photographing! Most of us were sweating our makeup off but luckily refreshing snacks and water were provided to us before the afternoon’s zero hour. We were supposed to start the parade around 1pm and be the first persons on stage. The idea was to stand in two lines and do the relatively easy choreography designed for us. The most important thing was to put some effort in the moves, not to necessarily remember everything!

Since waiting took so long, some of us went for a coffee break outside the festival area. At that moment we got the first impression of what was to come! When the locals saw us westerners fully dressed to their local costumes they went totally crazy like we would be rock stars never seen before. It was hard to move in the crowd when everyone wanted to take a selfie or a group picture with us. 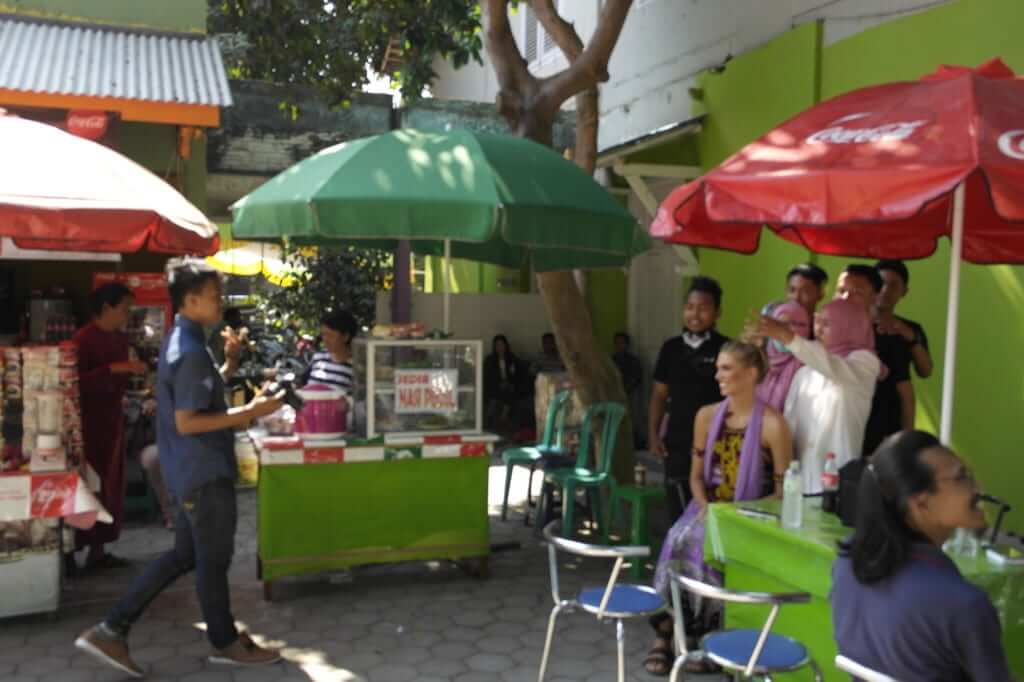 After the coffee break started the real action! Girls got big and heavy but beautiful crowns on their head and we were guided to the stage. There was massive amount of people in the audience and later we were told that at least 13 different TV-channels from all around Indonesia were filming the show. It definitely felt like we were big famous stars when walking through the stage while the audience was cheering for us! Our choreography didn’t always go right but we certainly tried our best! 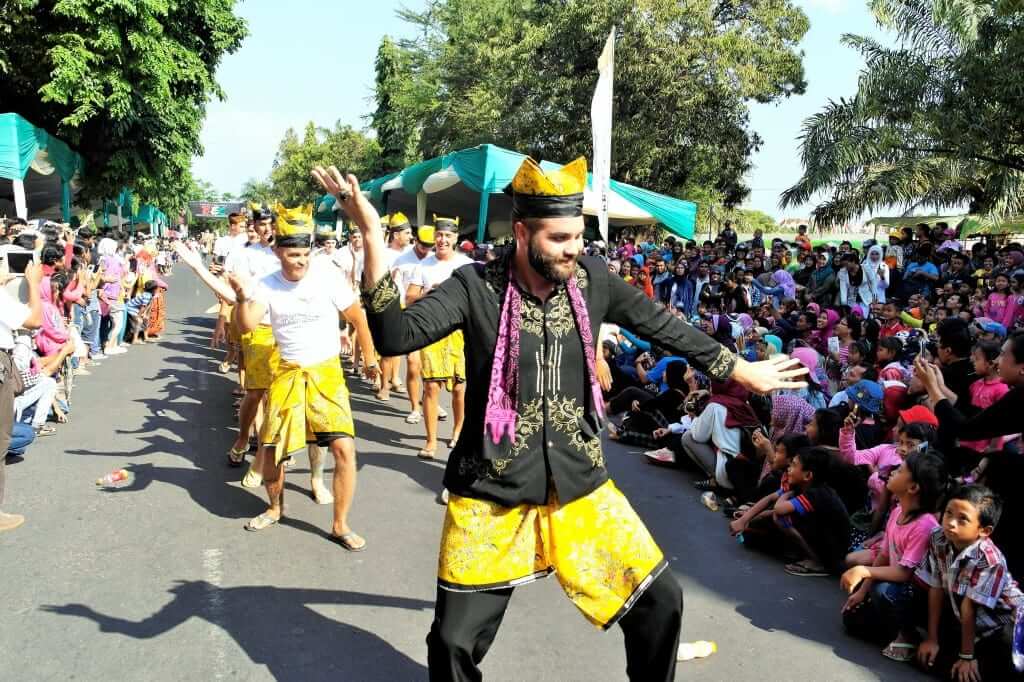 The actual parade made a long round around the city, but we were told to do only shorter version of it which was a good idea in that heat! After the stage part our group got closer to the audience and the cheering and enthusiastic selfie-takers surrounded us from every direction. We have probably never been captured in that many cameras in our lives! The reactions of the locals varied. Many of them were laughing at us but in a friendly way. They found our effort of dancing really amusing. We felt that many also respected our participation. This was the first time international visitors took part in the parade and you could definitely feel it! 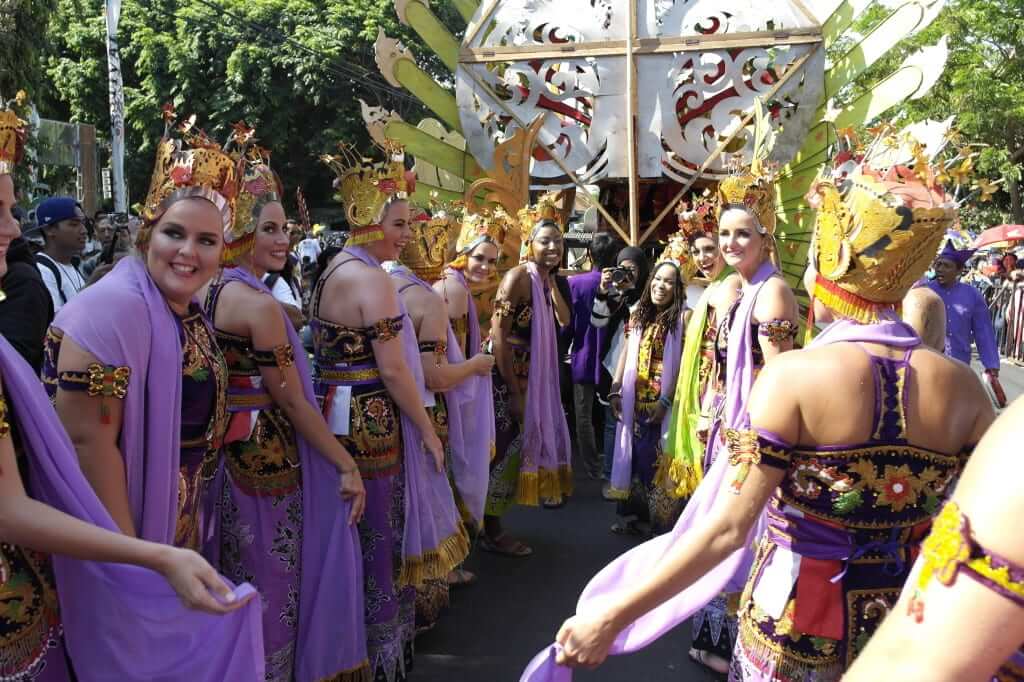 After the parade we were bit lost in our minds. What did just happen? It was a moment we didn’t expect to experience. We had a moment to enjoy the rest of the actual parade before heading back to Hotel for the shower. The evening we surprisingly ended up having a double dinner since the local government wanted to thank us and provided dinner in a fancy garden atmosphere. The invitation came just bit late since we were already eating another one! But who could resist delicious Indonesian food? Second dinner didn’t sound too bad after all. The evening ended in the visit of a local “night club”, Mascot. I think quite many of us were happy but exhausted after the long day!

Next morning a group of pleased but tired students started making their way back to Bali! The weekend was indeed one of the most unforgettable ones! We want to thank one more time Marina Srikandi for organizing it and for taking care of us very well! It is amazing that these kind of opportunities were organized for us! 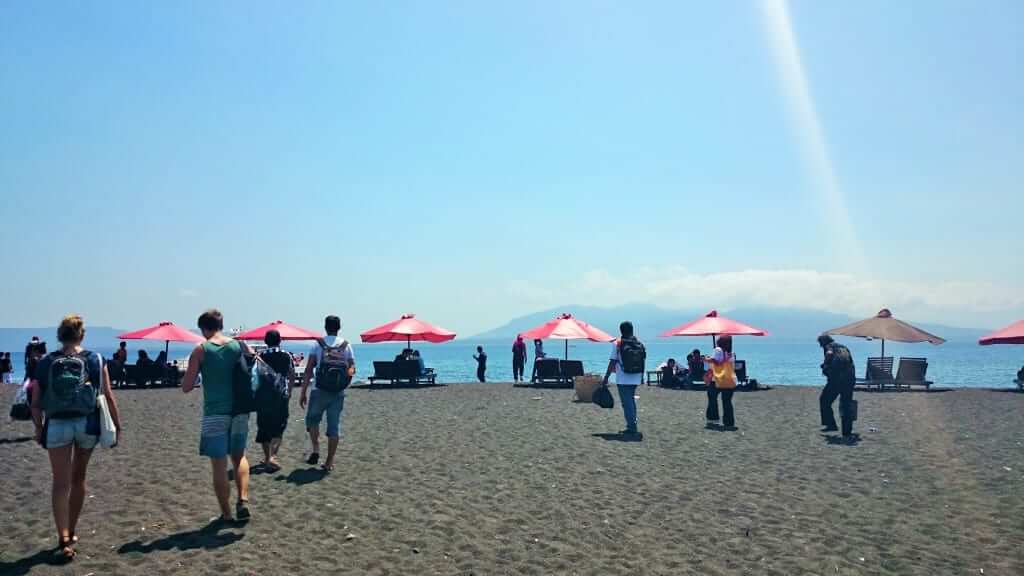