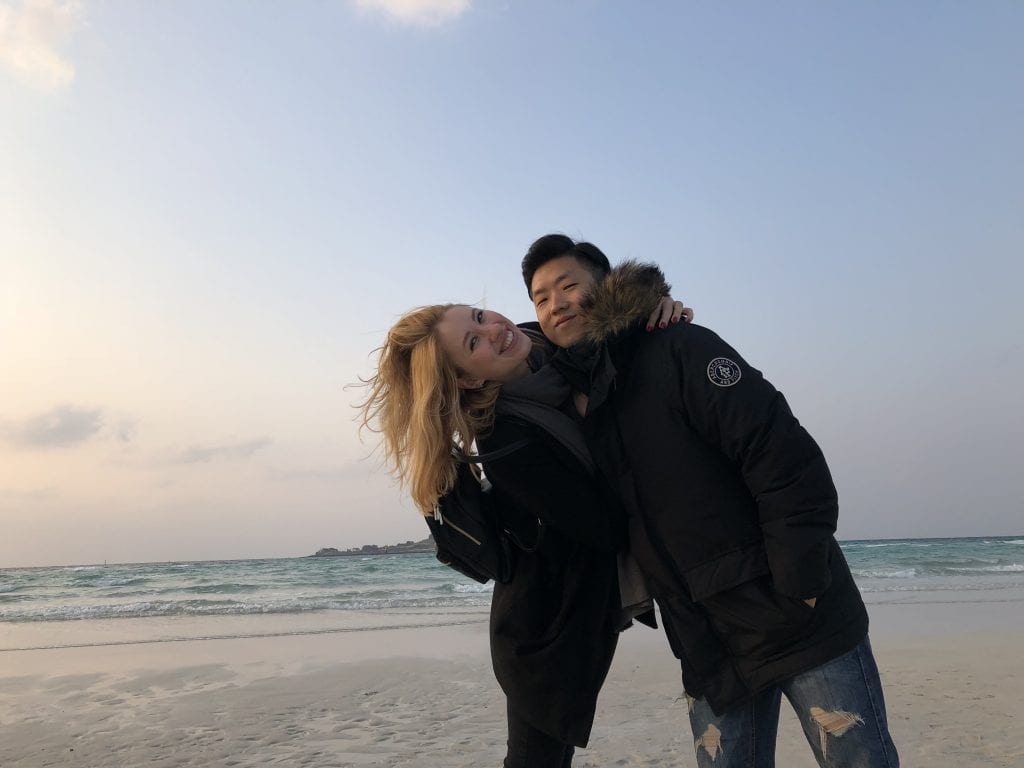 Exchange semester abroad can be a life-changing experience in many ways. Julia’s semester abroad in South Korea with Asia Exchange took an unexpected turn when she met the love of her life, Jinsol. Today, the German-Korean couple is married and lives together in Germany. Julia and Jinsol shared their thoughts on living in a cross-cultural relationship.

Semester abroad brought the couple together

Julia studied abroad in South Korea at Hankuk University of Foreign Studies with Asia Exchange in 2017-2018. One night, Julia and her friends decided to go to spend a night at a bar in Itaewon. There she met a Korean guy Jinsol, and the two immediately hit it off.

A few weeks after Julia and Jinsol met, they started to hang out and realized that they have much in common despite different cultural backgrounds. After the couple started dating, Julia decided to extend her exchange in Seoul. She contacted Asia Exchange and was happy to know that she could easily extend her stay in Korea for the second semester.

“At first, I planned to stay in Korea for one semester. After we became a couple, I tried to find a way to stay longer. So I extended my stay for Jinsol and studied for one whole year at HUFS. And after that, I even decided to write my Master’s thesis in South Korea,” Julia explains.

Falling in love with someone from another country can mean a lot of traveling and long periods of time not seeing each other. After spending a few months apart, Jinsol decided to visit Julia in Germany and propose to her at the airport. “He was kneeling, and nobody around us was interested. They just looked at us weirdly,” Julia and Jinsol say and laugh.

The couple got married only one year and two months after Julia started her exchange studies in South Korea.” We kind of had three weddings: the first one was a registry office wedding for just the two of us. Then a later same year, we had a western-style and traditional Korean-style wedding on the same day in Korea.”

The wedding day was unforgettable not only for Julia and Jinsol but also for their families as well. Julia’s German friends and family traveled to South Korea to celebrate the couple’s wedding day. “My friend and family also enjoyed this new kind of wedding even though it was super different from the German wedding,” says Julia.

Being in a cross-cultural relationship also affects the families of the couple. There can be language barriers or prejudices that could cause problems. Luckily, both Jinsol’s and Julia’s families were supportive from the beginning.

“My parents didn’t find anything weird about our relationship. They are really open to everything. They even say that Julia looks Asian somehow,” says Jinsol and laughs. “Julia is also very polite and she knows that Korean people have deep respect towards older people. In addition, my siblings love her so there were no difficulties,” Jinsol continues.

Julia’s family was also really supportive of the couple’s relationship. “My family also respected Jinsol from the very beginning. My mom and older brother visited me in South Korea and Jinsol was very caretaking and showed them Seoul and the Korean countryside. However, after Jinsol proposed to me, my mom started worrying if I’m going to move to Korea for good. That was the only concern she had,” Julia explains.

Nowadays Julia and Jinsol are living in Germany. Since Julia already had the chance to experience South Korean culture during her semester abroad, the couple decided to move to Germany so Jinsol could get to know German culture as well.

In everyday life, the couple uses English together. However, both are learning each other’s native languages as well. Communication has not been a problem in their relationship. “Together we use English 80-90 percent of the time. Sometimes Jinsol asks me something in Korean or I ask him something in German” Julia mentions.

Cultural differences – Best of both worlds

Julia and Jinsol have naturally integrated both German and Korean cultural habits into their relationship and everyday life. The biggest cultural difference they can name between Germany and Korea is the food culture.

Julia has noticed that Korean people like to organize events and holidays carefully beforehand. “I adopted the way Koreans travel. Now that we are together, I got used to that when we travel to new places, we walk the whole time and visit different places. Not just stay at one place the whole week,” Julia says.

After moving to Germany, Jinsol has learned a lot about his own culture as well. He has started to appreciate Korean education more and the way Korean people respect each other. However, he says that when he’s in Germany, he is more relaxed when meeting new people.

However, living in a cross-cultural relationship includes some unexpected challenges. “Being in a multicultural relationship might look cool from the outside. However, there are many difficulties when you are adapting to a new culture. Of course, I’m really happy with my relationship with Julia, but small cultural differences can bring a lot of difficulties,” Jinsol says. “Yes, the biggest problem is that the one person always has to stay far away from his or her family. It’s sometimes hard for our families and for us, but we do not regret anything,” Julia adds.

What are the couple’s plans for the future?

Jinsol and Julia’s future looks bright. They might want to move together to South Korea at some point. However, they haven’t made any decisions yet, and the world is wide open for the young couple. As long as they are together, moving to a different country or continent isn’t an issue. “I’m thankful that I had the opportunity to study abroad with Asia Exchange. I might have never met Jinsol if wouldn’t have studied abroad”, Julia sums up.

Do you want to study abroad? Find out more information here!

This article was written by our intern Iina!